Change Ad Consent Do not sell my data Seton Hall post-game thread [merged thread]] | The Boneyard
Menu
Log in
Register
Install the app
You are using an out of date browser. It may not display this or other websites correctly.
You should upgrade or use an alternative browser.

I will have to admit - I watched Q1 shaking my head. Is this the performance of a team that had 10 days off and had Geno on them as well as their own distaste in how the last game vs. SC went? I fully expected us to come out like a house on fire, and instead, it was barely smoldering embers. Maybe they were rusty? Not sure what - if the game was early, I'd say that they were still half asleep...

Having said that, Q2 was more what I expected the start of the game to look like. 23-6 smack down. After poor shooting in Q1, at half time our FG% was 50%. Dropped SHU down to 24%. Defense was much better as well.

So I thought "ok here we go. The universe is realigned and we are back on track". Good grief. I was wrong. We outscored SHU by 17 in Q2. We won Q4 by 8. They basically played is even for 26 minutes. Not sure what Geno will think, but SHU lost to Fordham and USC and needed OT to beat Toledo. They "walloped" Lehigh by 10. And did all this with one of their best players who was out for the game tonight. 16 assists on 34 made baskets? That is nothing close to UCONN basketball.

Ultimately we won the game, but it was not fun at all to watch. Without being overlay dramatic, 2 good things came out of the game. Paige is phenomenal, and we won. Other than that a largely forgettable game. NOT what I was expecting after all the bluster and team comments after the SC loss. Finished Q4 strong after Paige got a bloody nose, but just a yuck overall vibe. These guys need to have a fire lit under them, or a bulb to go off, because right now, they look nothing like a team ready to make a NC run.

As usual, Paige was Paige. I may mention this all year, but anyone who left her out of the NPOY discussion in favor of "others" seriously had a screw loose. Did they think she was great by accident last season? That her play all year long was an aberration or luck? I say "Pfft". Need her to score? Check. Need her to play defense? Check. Need her to rebound? Check. Need her to run the offense effectively? Check. Need her to dish out assists? Check. And she's only a sophomore. Good lawd - we are lucky to have her, and be able to watch her for 2+ more years. 23 points, 9 boards, 7 assists, 5 steals, 1 bloody nose.

Liv was Liv. Does some good things, does some head scratching things. I didn't think she was as all around impressive as she was against SC, but I do like what she brings to the floor. I don't see much improvement over last season, but sadly, we have no other options.

Aaliyah - she continues to mystify me. I keep waiting for the Liya who played so well at the end of last season. 4 points, 5 rebounds, and 4 TO's in H1.

Christyn struggled in Q1. Missed some open 3's. Then went back to doing what she does well - slashing, etc.

Evina was quiet. Not sure if something is wrong, but as much as she's a "leader", getting little offense is going to be a problem against better teams.

Caroline - 1st off the bench, and just overwhelmed yet again. Airball, poor defense, 2 fouls in about 5 minutes of play - not a good night for her.

Dorka - some rebounds seem to find their way to her and sometimes she gets after it. Loved seeing her nail the 3. Some have been down on her for taking those shots, but she CAN make them.

Nika - As my friend @MilfordHusky said, "Croatian larceny". Love her aggression, but 2 points on 1-5 shooting and 4 fouls? More fouls than points. Those are negative stats (notwithstanding the normal +/-).

Some thoughts on the Seton Hall game:

Where is our team? This doesn't look like the UCONN I knew! No 'drive'.... No mental concentration. Not looking like a #2 ranking team.

Paige is Paige, a win is win but little disappointment for Nika and Carolina, otherwise can be even better. 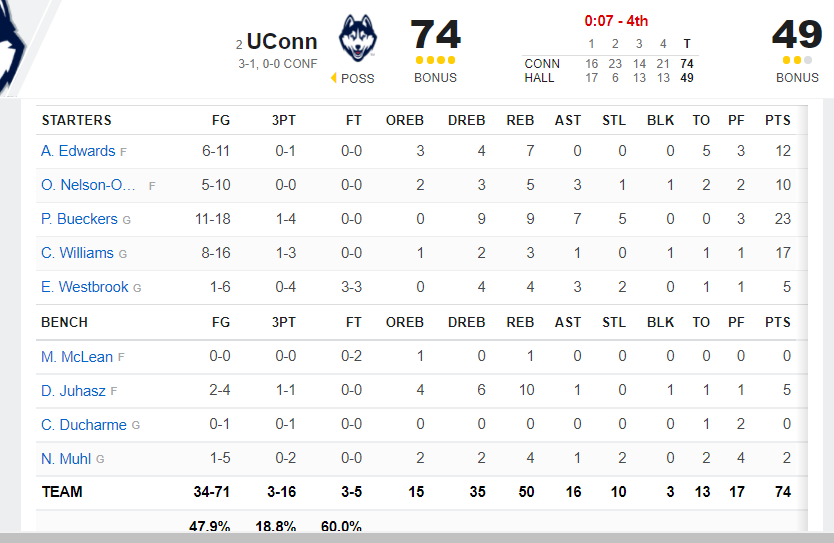 In the vernacular of the hood, "somethin' ain't right". This does not look anything like the same team, with the same players, as last year. I know it's early in the season, but save for Paige, they just don't look good. Yeah, a 20+ win at a tough court with a tough crowd - but too many things not clicking.

I'm also still mystified why Piath and DeBarry see no time! Not even garbage minutes.

I thought we didn't look like a top-10 team. The team and several players look to have regressed. Caroline looked badly overmatched. Lots and lots of rooms for improvement. The ND game could be tough.

topogigio said:
In the vernacular of the hood, "somethin' ain't right". This does not look anything like the same team, with the same players, as last year. I know it's early in the season, but save for Paige, they just don't look good. Yeah, a 20+ win at a tough court with a tough crowd - but too many things not clicking.
Expand ...

Maybe he should sit Paige and let the others start producing. They ARE too dependent on her.
H

You can't have one player who leads the team in points/rebounds/steals/assists and expect to go far in the Championship Tournament. PG needs to play on a more balanced team...and I am not sure that is going to happen for awhile, if at all.

Were there any assists on any of Paige's baskets? I mean seriously.

1. Layoff showed in the 1st Quarter
2. Paige was Paige (God only knows what this team would be without her)
3. ONO and AE were what they are expected to be down low
4. Not a spectacular game from Westbrook tonight
5. Dorka gave some positive minutes off the bench
6. Nika looked horrible, having more fouls than points.
7. Where is Piath and DeBarry ???
8. Caroline plays like the Collegiate Game is WAY bigger than what she is capable of handling
9. Aubrey Griffin's game and spark is greatly missesd
10. Mir looks lost on the court and shows that she doesn't know where she fits in on the offense.

This team needs to be able to "Step It Up" on Sunday against Notre Dame.

LCConnFan said:
Maybe he should sit Paige and let the others start producing. They ARE too dependent on her.
Expand ...

If Geno is shielding his eyes at times with Paige on court he will be wearing a hoodie if he sits Paige for more than 1 minute.
S

With all of this talent....
Touted newcomers....
Sage returnees....
HOF Coach....
Team is a middle of the pack without Paige.
No chemistry
No cohesion
Ducharme showed very little.
Nika lost her shot
Olivia regressing
Stop relying on Paige
Start playing TEAM basketball
IN A P-5 conference, this is a .500 team.
No way this team beats SC away
Unfortunately...

I am really hopeful that UConn's first game back at Gampel in two years on Sunday, in front of a full house, against the Irish, will be a cure for whatever is ailing the Huskies right now.

Probably the worst 25 pt win I've seen. Geno's statement "We have no depth" will probably hold true for at least a few more weeks and perhaps longer. The only concern with Paige is her 3 pt %. Sundays game may be a fight.

Maybe we can sneak Dolson on the court on Sunday.

MilfordHusky said:
I thought we didn't look like a top-10 team. The team and several players look to have regressed. Caroline looked badly overmatched. Lots and lots of rooms for improvement. The ND game could be tough.
Expand ...

Caroline looks like a "deer in the headlights." In her few 1st half minutes, she dribbled the ball off her foot, committed a silly foul and shot up an airball.

Husky fanatic said:
Probably the worst 25 pt win I've seen. Geno's statement "We have no depth" will probably hold true for at least a few more weeks and perhaps longer. The only concern with Paige is her 3 pt %. Sundays game may be a fight.
Expand ...

I actually like that Paige changed her game plan a bit when she did not feel the 3 pt shot and went more aggressive to the basket.

Hayven said:
The Irish game will probably be more interesting than most would assume
Expand ...

if UConn plays the way they did tonight against Notre Dame they are in big, big trouble...............I'm hoping the rest of the team will finally awaken from their slumber against the hated Golden Domers.......
You must log in or register to reply here.
Share:
Facebook Twitter Pinterest Tumblr WhatsApp Email Link